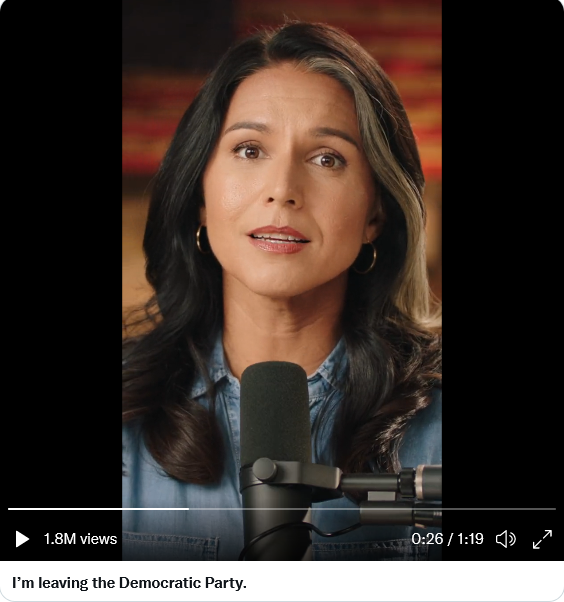 In Twitter video this morning, the former presidential candidate and former congresswoman from Hawaii said, “I can no longer remain in today’s Democratic Party that is now under the complete control of an elitist cabal of warmongers driven by cowardly wokeness, who divide us by racializing every issue and stoking anti-white racism [and] actively work to undermine our God-given freedoms.”

I’m happy to see this announcement.

But here’s my problem.

She chose to endorse Joe Biden.

By doing so, she actively promoted the “elitist cabal of warmongers” that she consistently – and justifiably – called out throughout her presidential campaign.

Gabbard had the courage to condemn Cackling Kamara Harris – and Hillary Clinton (and is still alive). She called out the deep state war machine. She called out corporate mainstream media.

In endorsing Biden, Gabbard said, “I’m confident that he will lead our country, guided by the spirit of aloha respect and compassion, and thus help heal the divisiveness that has been tearing our country apart.”

She knows now, and she knew then, that was total bullshit.

While pledging to work to end “regime change wars” and “removing the existential threat of nuclear war,” Gabbard chose to endorse the globalist elite’s chosen flunky to accelerate regime change wars and, who today, continues to verbally fan the flames of a potential nuclear battle in Ukraine and/or Russia.

Hopefully, Gabbard has finally come to realize that enough is enough.