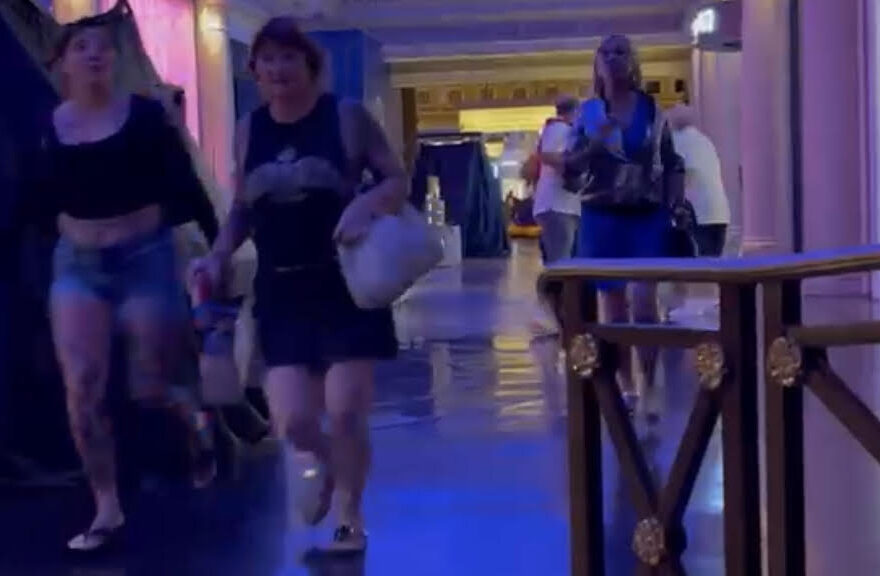 Fear is the main weapon of the bad guys. Whether it works is up to you.

Apparently there were no active shooters.

It seems that a shattered glass door at one Las Vegas casino instilled mass panic at five or more other casinos as far as a mile and a half up the Strip. At least that’s what the news and the Las Vegas police suggest. Evidently, America is now in a cocked state where the trigger of fear can be activated with the slightest touch.

Last Saturday night I was with my son Kyle and his friend Isaac, sitting on a bench near an escalator on the top floor of the Forum Shops at Caesars Palace, Las Vegas. Ryan, my other son, and a friend of his had disappeared somewhere into the shops.

Suddenly swarms of people came running toward the escalators. Obviously something was going on.

As the panicked crowd rushed past us Kyle asked several times what they were running from. Finally a voice called out that there was an “active shooter.”

We didn’t hear any shots.

I walked toward the shops to find Ryan and his friend. They emerged from around a corner and said something about somebody shooting. Ryan’s friend had been inside Odyssey VR, a virtual reality shop, when the store manager, or whoever, shut down his machine, pulled off his head gear and instructed him, in a panic, to leave the store. There was an active shooter, he said.

So we rode the escalator down to the ground floor—still no shots heard—and exited Caesar’s onto the Las Vegas strip. Everything was pretty normal on the street. People—some of them pretty rattled—stood on the sidewalks talking about the “active shooter.” We crossed Las Vegas Boulevard toward the Flamingo, where we were staying. We walked up the Linq Promenade—a row of shops, bars and eateries—toward a Flamingo side entrance.

As we approached the entrance, we were met by a swarm of people fleeing the Flamingo in a panic.

“Active shooter,” they were yelling as they spilled into the street.

We turned around and headed back toward Las Vegas Boulevard, then took a left turn toward a front casino entrance. From outside, through the glass doors, we could inside the casino where people were casually sitting at slot machines. There was no sign of shooting and no sign of concern.

An older woman was lying on the ground near a slot machine. Three or four security guards in yellow shirts—not paramedics—tended to her. Somebody walked over and asked what happened to her. The security guards didn’t respond.

Was she shot? Did she fall off her chair? Did she have a heart attack?

After a while a man and a women—apparently her friends or family members—rushed over to the woman.

It was about 11:00. Kyle and Ryan wanted to gamble. It was more than 100 degrees outside and we’d been walking around all night. I was sweaty. I’m going to take a quick shower then I’ll meet you back down here, I told Kyle and Ryan.

I approached a large bank of elevators to get up to my room.

Three hotel employees were mopping up blood. Not pools of red blood like you might see after a shooting. It was small smears of blood scattered all around the elevator area. A mesmerized crowd stood and gawked. People who had come down an elevator wouldn’t get off. I asked one of the moppers what had happened.

“Somebody fell down,” she said.

I asked the stupefied elevator occupants whether I might get in and go to up my room.

Once on board, a man inside the elevator announced that he had heard that there was an active shooter at the New York-New York casino.

“There was one at the MGM too,” another man added. Through the rest of the night, I also heard similar reports about the Bally’s and Paris casinos.

When I awoke the next morning I checked the news online for reports about the night’s events. I found three short articles from Fox News, Yahoo News and a local TV news site.

All of them reported about a false report of an active shooter at MGM. Apparently, according to the news, an angry patron had shattered a glass door with a rock, frightening the crowds of people who mistook the shattering glass as gunfire. Two of the reports didn’t mention the panic at other casinos. The third mentioned the active shooter reports in other casinos but didn’t try to explain how a shattered door at MGM caused a stampede down the escalators at Caesars Palace 1.4 miles away. Later, several more reports appeared online, most of which didn’t report about incidents other than the one at MGM.

In summary, I witnessed two “active shooter” panics, read about a third and heard second hand accounts about several others, all within a span of less than an hour. With the exception of the shattered door at the MGM, I still have no explanation for the mass panic. I heard no shots, saw not a single police officer and saw not a single police cruiser at Caesars or the Flamingo.

Just for fun, here’s a photo of the MGM door posted on Twitter.

“Look fear in the face and it will cease to trouble you.” ~ Sri Yukteswar Giri