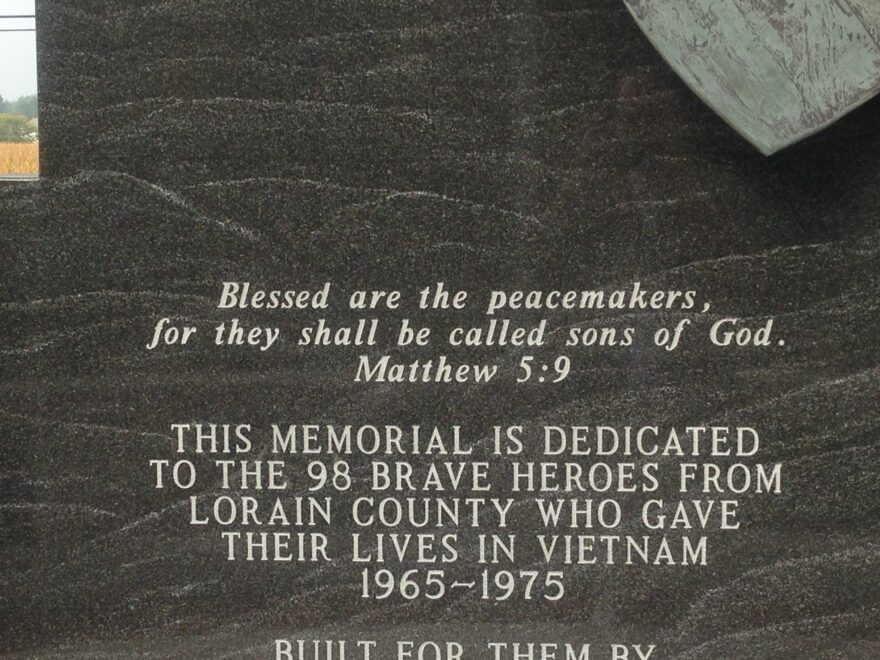 their beliefs and/or answering the call of their country.

For years, until last fall, a photo of the black granite monument at the Vietnam Veterans Memorial of Lorain County, in Amherst, Ohio, served as my Facebook cover photo. When I happened upon the memorial in September 2013, I was immediately struck by the message inscribed at the top of the stone. It wasn’t a macho image about being the toughest nation in the world, boasting the strongest military or kicking anybody’s ass. 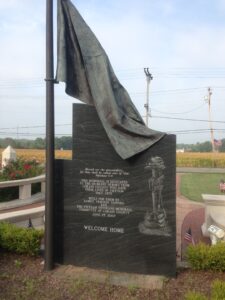 Rather, it reflects the words of Jesus, spoken during his Sermon on the Mount, as recorded in Matthew 5:9—”Blessed are the peacemakers, for they shall be called sons of God.”

At first look, I didn’t know why that quotation was chosen to highlight the tribute to the 98 young Lorain County men whose lives were taken in Vietnam. It was almost seven years before I found out. But I interpreted it at the time as an acknowledgement that peace is preferable to hostility, bloodshed, death and the resulting despair of mourning parents, spouses and children left behind in the wake of war.

One of the 98 young men lost was Richard Lowell Irvin, of Sheffield Lake, who was killed in a helicopter crash in Lam Dong, South Vietnam, on the day before his 21st birthday—and 10 months into his tour of duty.

“I never got to know you, never got a hug or a kiss, never got a pat on the back or a scolding when needed,” Irvin’s daughter, Roxi, wrote on the website of the Vietnam Veterans Memorial Committee of Lorain County, which unveiled the monument in June 2007. “You were gone before I would even know your name.  Even though I never got any of those things you left me one of the greatest gifts ever… my freedom. I can’t complain, what child was more loved than me. Thank you dad! You will always be in my heart!
Your daughter;
Roxi”

Had he lived, Irvin would turn 74 years old in August.

I came upon the monument about a month after my 72-year-old dad was taken off life support in a drab specialty hospital about a mile away. I was in Amherst to interview then Mayor David Taylor for a town profile I was writing in the city’s annual magazine and community guide. Before my dad was admitted to the hospital a couple months earlier, I hadn’t been in Amherst for around 26 years—since I reported for The Lorain Journal—so I decided to drive around.

Although I continued to display the image at the top of my Facebook page, I had wondered for years whether my reaction to the “peacekeepers” inscription was what the committee had in mind when they selected the quote. Finally, in May 2020, I contacted the committee and received an answer from Joyce Young, a member of the committee, who shared an explanation from Ron Stevanus, who suggested the Bible verse.

“The peacemakers, pertaining to veterans’ military service in this case, are the young boys who may have just graduated from school or college, they may have had a girlfriend or wife and possibly even one or two children, but some would never make it back home to see grandchildren,” Stevanus wrote. “Some who were drafted fled to Canada, others saw it as their civic duty to protect the freedoms of the United States of America, one of which is the most important, the freedom of religion. How many of these soldiers knew Christ as their savior, I don’t know. Let’s hope that Jesus’ proclamation of Matthew 5:9 blankets these brave young men. Think of this situation as a modern day David and his army fighting the heathen Philistines.”

Stevanus’ brother, Larry, is a Vietnam veteran who was a member of the committee when it was designing the memorial, Young said. 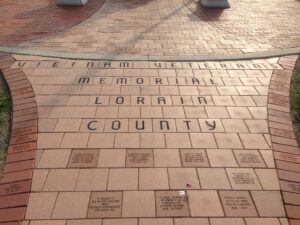 “It was dedicated in 2007,” she wrote. “Larry suggested that we etch the ‘field memorial’ …. the helmet on a rifle that is in boots. His brother Ron Stevanus worked on that etching drawing, and it was Ron who suggested the Bible verse. I also asked Ron why that particular verse. When these two aspects were presented to the committee, we unanimously agreed.”

According to Larry Stevanus, “As we were nearing the final design I asked my brother Ron to draw the ‘Field Memorial’ i.e. the rifle, boots and helmet. When he finished it he added the Bible verse. I was overwhelmed when I saw it.”

The same verse, he said, is “engraved on a paver by the road at the entrance to the walk.”

The memorial is located at 625 North Lake Street, in Amherst.