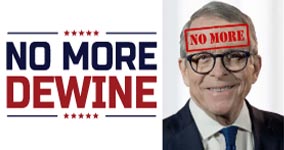 During a meeting in Independence, during which the governor was booed in unprecedented fashion by many attendees, the central and executive committees voted instead to endorse challenger Jim Renacci, a former U.S. congressman, for governor in the party primary election.

A dejected DeWine left the meeting before the votes were counted. Asked on his way out by attendee Kyle McEntee whether he would debate Renacci and challenger Joe Blystone, DeWine said, “done.”

To this point, DeWine has refused to participate in debates with his opponents.

Blystone, the anti-establishment farmer from the Columbus area, was present at the meeting and spoke in pursuit of an endorsement, but it was clear from the outset that the outsider candidate, who has a strong following outside of heavily populated establishment controlled counties like Cuyahoga, wasn’t going to be given much consideration.

In other significant endorsements, the party, not surprisingly, voted to endorse Max Miller over Jonah Schulz, Charlie Gaddis and Rep. Bob Gibbs in what is now Ohio’s 7th U.S. Congressional District, and accepted the scanning committee’s recommended endorsement of Mike Gibbons for U.S. Senate.

While the meeting took place, Pukita addressed the grassroots conservative group Medina County Friends and Neighbors (McFAN) in Medina. Gibbons was scheduled to speak at McFAN as well, but cancelled his appearance to attend the Cuyahoga County meeting.

In the governor’s race, after announcing the scanning committee’s recommendation that the party endorse DeWine for a second term, a motion was made to replace DeWine with a Renacci endorsement. Party insiders, including Strongsville Mayor Tom Perciak, Brecksville Mayor Jerry Hruby and Lyndhurst Mayor Pat Ward, spoke in favor of DeWine. Perciak, Hruby and Ward are among the many elected politicians around Ohio—including Strongsville Ward 4 Councilman Gordon Short—who have publicly endorsed DeWine.

Speakers talking in favor of endorsing Renacci cited DeWine’s attack on the God-given freedom of Ohioans during the pandemic, including citizen curfews and lockdowns, the closing of businesses—particularly small, independent and family businesses—which deprived business owners of their investments and their ability to provide for their families, while putting millions of Ohioans out of work, as well as forcing children to wear face masks in school for as long as eight hours a day, which the speaker compared to child abuse.

Responding to claims that DeWine is pro-life, one speaker noted that DeWine appointed two state health directors who were abortion advocates, including Amy Acton. A DeWine supporter noted that DeWine was recently endorsed by the Ohio Restaurant Association (ORA)—a suggestion that restaurant owners approved of their livelihoods being shut down by the governor. A DeWine opponent countered by noting that ORA is a trade association that is dominated by big money national restaurant chains, rather than local small business owners.

During the endorsement process for Ohio Congressional District 7, Schulz, Miller and Gattis were given time to address the body. Gibbs, a long time congressman from Medina, who was redistricted into the new 7th District, did not attend the meeting.

After the candidates spoke, I motioned that the scanning committee’s recommendation to endorse Miller be amended to endorse Schulz instead.

Previously, in all contests I have seen since I joined the Central Committee in 2003, including earlier at today’s meeting, each candidate was given two to three minutes to speak, and was allowed two or three supporters to speak on their behalf. For this contest, I was told by Chairwoman Lisa Sticken that each candidate could have a single supporter speak on their behalf and that the time would be cut to one minute, instead of two.

Ultimately, I got my two minutes and delivered a probably incoherent talk in which I noted that DeWine’s attack on individual freedom is what rightfully cost him the party’s endorsement, and that Schulz’ defense of freedom of the reason why I will vote for him. I also noted that Miller needs to run on more than his endorsement from Donald Trump. Although I will support Trump as he campaigns to reclaim the presidency that was stolen from him in 2020, Trump also is known to make some questionable endorsements. Earlier this week, for example, Trump rescinded his earlier endorsement of Alabama senate candidate Mo Brooks, who Trump now considers “woke” and who disputes that the 2020 election was stolen. Yet Trump endorsed Brooks earlier.

Directly after I spoke, Miller supporter Shannon Burns, a member of the Cuyahoga County Central Committee and the Ohio GOP Central Committee, and president of the Strongsville Republican Club, motioned to call the question—forcing a vote and shutting down discussion with not a single Miller supporter—nor any further Schulz supporters—taking the podium. It was the equivalent of the defense in a criminal trial declining to call any defense witnesses.

In the end, Miller was endorsed.