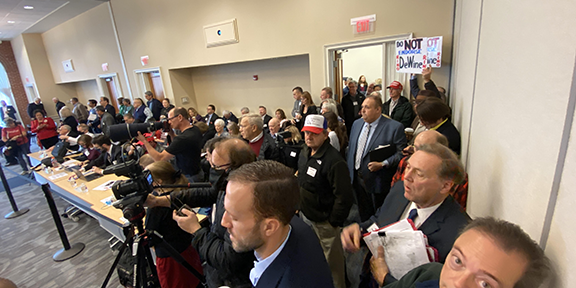 I am a registered republican. That doesn’t mean I agree with everything that party organizations do.

Civil debate about differences of opinion within any organization is healthy.

Squelching of opposing views is not.

The Ohio Republican party appears to have become more of political goon squad that supports powerful interests than a group that is dedicated to electing public servants who believe in protecting individual rights and limiting the power of government over sovereign individuals.

The December meeting of the Ohio Republican State Central Committee – the party’s governing body – was an example of goon rule in action, missing only the violence. Common citizens – those of us whom the party hits up to finance its power, yet whose opinions are marginalized – were clearly unwelcome at the meeting. While the meeting must be held in public by law, GOP leadership did everything it could to make it difficult to observe its shenanigans. After provoking onlookers by drastically limiting “public” space to a small roped-off confinement in an amply spacious meeting room, Chairman Robert Paduchik exercised a drama queen approach throughout the meeting, repeatedly chastising a generally tame crowd that any “outbursts” would result in the expulsion of the public.

Ultimately, Paduchik got his way.

Amidst general calmness in the room, as if on cue a central committeewoman complained that she was being harassed by onlookers and that the onlookers were voice voting on committee motions. Video of the meeting reveals that it wasn’t true. Still, the typically complicit mainstream media obediently reported about the “raucous” crowd.

Paduchuck took the opportunity to demand the expulsion of the public. After some of us refused to leave, he terminated the meeting.

This is how establishment politics work. As comedian George Carlin explained, “It’s a big club and you ain’t in it.”

As voters, if we ain’t in it, it’s because we don’t try hard enough to exercise our power.

On May 3, eight republican candidates will be on the ballot for the nomination to represent the party’s voters in the November election for a new U.S. senator. Of the eight, only Mark Pukita attended the Central Committee circus and only Mark Pukita has had the courage to call party leaders out for their dishonesty, disrespect and selling out of regular Ohioans.

Pukita also is the only candidate in any race who has attended meetings of the Ohio Board of Education and confronted the board about its promotion of Critical Race Theory and similar woke indoctrination programs in government schools.

At the next Central Committee meeting, on Friday, February 4, it is assured that the party stooges will attempt to ram through a re-election endorsement of Gov. Mike DeWine – the despot who ruined small family businesses, drained Ohio’s economy and implemented preposterous and ineffective draconian orders that violated basic human rights under the guise of trying to control a virus. Even without an endorsement, party stooges already have violated party bylaws by gifting DeWine perhaps more than $1 million, according to a lawsuit filed by five courageous and uncommonly ethical Central Committee members.

I encourage citizens who have had enough of political stooges ordering them to mask up, comply with vaccine mandates and choosing if and when people may operate their businesses or participate in society, to consider the following actions:

I am an elected member of the Cuyahoga County GOP Central Committee representing Strongsville Precinct 3-C, and the Advocacy Committee chair of the Strongsville GOP. I am a member of these and several other organizations, none of which define who I am.