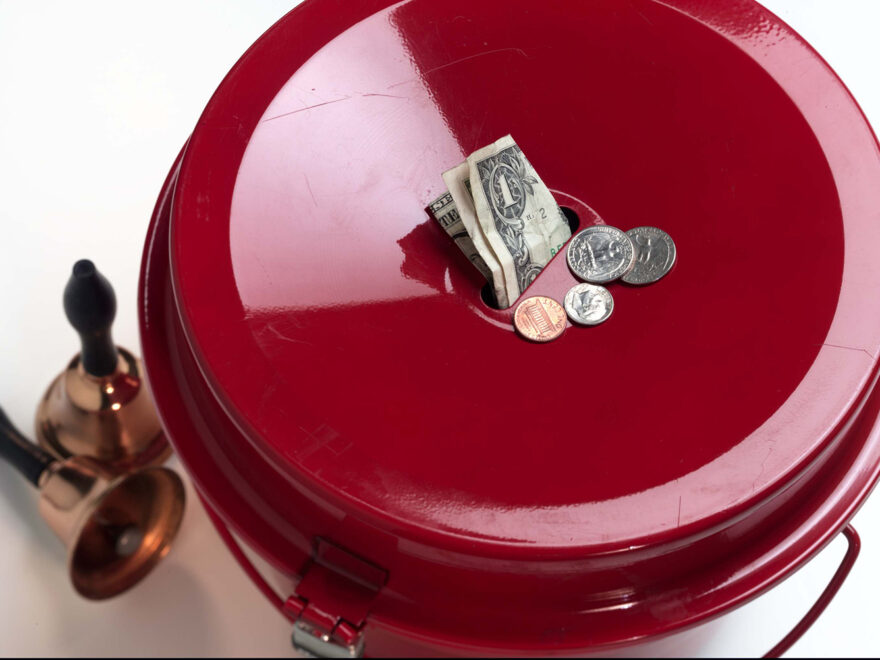 During Christmases past, standing in the cold for an hour or so, ringing a festive bell to entice shoppers to drop a buck or two – or some loose change – into the metal kettle of the Salvation Army, had become a joyfully anticipated holiday tradition.

Every year until covid, fellow members of the Strongsville Rotary have been stationed at the doors of the local Giant Eagle – and sometimes other locations around town as well – to raise money to help people in need, while enjoying camaraderie and Christmas cheer.

Over the past several years, I’ve also enjoyed supporting the Salvation Army’s efforts to assist victims of human trafficking – partly through Rotary’s Northeast Ohio Interact clubs for high school students. Like the Salvation Army, the Strongsville Rotary is a part of Greater Cleveland’s Coordinated Response to Human Trafficking through the Collaborative to End Human Trafficking. Salvation Army leaders have generously taken their time to speak at the Strongsville Rotary’s annual community forums on human trafficking and at a Rotary district Interact meeting.

Unfortunately, however, it appears that simply upon the basis of my skin color, the Salvation Army now considers me a racist.

According to a new Salvation Army report that was quickly removed from the organization’s website after it’s contents were exposed, the simple act of sending back a cold meal served at a restaurant is enough to demonstrate white privilege. The report also demands that I, as a white person, “stop denying that White privilege exists.”

In the report, Let’s Talk About Racism, Major Brian Jones, a white guy with a PhD, laments, “There were givens in my culture such as racial superiority, needing to be at the front of every line, and entitlement to privileges others did not have… In restaurants I witnessed White people, including myself, send their food back simply because it wasn’t hot enough or wasn’t good enough for them. There was an inherent right to complain until your demands were met.”

I don’t recall for sure whether I have ever returned a cold restaurant meal – I’m sure I must have at some time – but you can be sure that if I did, it wasn’t because I wanted to emphasize the clout of my pale skin. I will confess that if there is no ketchup on the table and I have French Fries on my plate, I will generally ask the server to bring a bottle over. But I assume black people can get away with the same act of entitlement.

“These are my suggestions for how White Americans can begin the process of creating lasting racial reconciliation and healing,” Jones reveals. “Stop denying that White privilege exists and learn how it supports racial inequity. You may not feel privileged, but it is likely that you have been excused from numerous negative experiences, as well as benefited positively simply because of your Whiteness. Denial of White privilege keeps the current systems affected by racism in place, and we must begin to change that.”

This is what I might describe as institutionalized brainwashing.

If the best illustration of white privilege Jones can muster is a Caucasian asking a waitress to give his cold pancakes a spin around the microwave, then, in my opinion, he is contributing to, rather than helping to rectify racial tension. Fanning the flames of hate, in fact, appears to be the objective of the mainstream media, many publicly elected psychopaths and an increasing number of once-respected, woke charity and service organizations.

Part of my newly found problem with the Salvation Army actually goes back a few weeks before I read the organization’s own scolding instructions to white people.

For years, the bell ringing was a fun event during which a group of two, three or more Rotarians gathered at the Giant Eagle, shared a few laughs, wished a Merry Christmas to passersby and raised some cash to help people who needed help.

This year, we were instructed that due to Covid, bell ringers would be restricted to one per door.

The issue isn’t that I would be lonely standing alone with my bell. The issue is that I have a problem enabling ridiculousness.

So I can go inside the store and buy groceries and engage dozens of shoppers – some whom haven’t bathed in a while. I can go to a football game and sit shoulder to shoulder with thousands of strangers. But in the frigid outdoor air outside the Giant Eagle, I must be isolated from the rest of humanity lest I become a viral spreader.

Some may consider this petty, but as long as we turn our heads, shut our eyes and accept stupidity, the longer and stronger the stupidity will remain with us. As a matter of principal, I have opted out of the bell ringing ceremony at least until some degree of sanity returns to the activity.

My subsequent reading of the Salvation Army’s smug and inflammatory admonishment of people of non-color tends to illustrate that time may not come anytime soon.

“The Salvation Army denounces racism in all forms.”

We agree on that part of the report.

The report also suggests that a “major component of The Salvation Army’s international mission statement is ‘… to preach the gospel of Jesus Christ and to meet human needs in his name without discrimination.’”

Do I need to point out, during this Christmas season, that Jesus’ ministry was one of inclusion, rather than finding ways to induce people to despise each other? In fact, Jesus might be a little surprised that the Christian Salvation Army believes that “our churches” themselves are based upon the ideal that some races are inherently inferior.

Jones, in the Salvation Army’s report, offers an entire page of suggestions for how White Americans can begin the process of creating lasting racial reconciliation and healing – non-divisive strategies like admitting that you’re racist even if you aren’t.

I don’t need a full page. I can do it in a sentence:

Smugly signaling your virtue by fanning the embers of hate makes you, Salvation Army, a part of the problem. Not the solution.