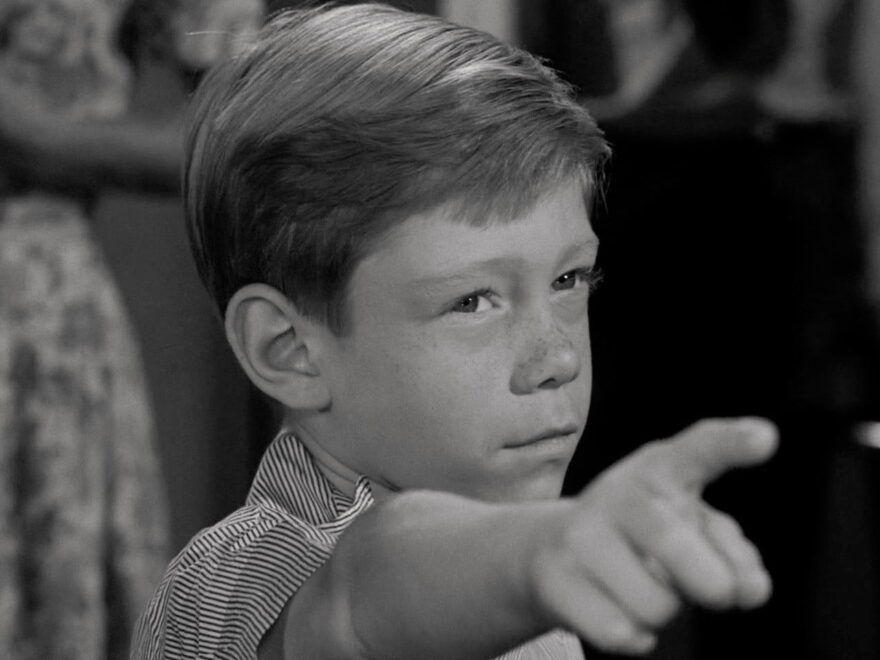 Fittingly, the town upon which six-year-old monster Anthony Fremont unleashed his omnipotent, dictatorial powers happened to be in Ohio.

In one of the most popular episodes of The Twilight Zone, Anthony held the town’s people in a perpetual state of fear. He took away their cars and electricity, and controlled the television signals.

Enjoying life in a way that displeased Anthony resulted in a person’s demise – perhaps banishment to the cornfield or being turned into a grotesque human jack-in-the-box.

That was the plight of Dan Hollis.

Dan simply wanted to listen to a Perry Como record on his birthday.

Dan’s punishment followed his desperate plea for somebody to do something about the monster.

“Somebody end this now,” he begged the other “adults” in the room who helplessly stood by, too pathetically afraid to make a move.

“You think about me,” Dan taunted the monster. “And maybe some man in this room, maybe somebody who is so sick to death of living in this kind of place and is willing to take a chance, will sneak up behind you and lay something heavy across your skull and end this once and for all.”

There were no takers.

Just as today there are few takers among our “leaders” who are willing to put an end to the dystopian “new normal” in Ohio, where every day or two some new absurd, irrational decree is issued by Ohio’s monster in charge – Gov. Mike DeWine – whose “leadership” continues to destroy lives and erode the self-respect of a large portion of the state’s residents. (Download the recent lawsuit against DeWine’s psychotic authoritarianism here.)

An increasing amount of compelling evidence has been seeping out daily – some even from the federal government itself – illustrating that lockdown measures have created larger social crises than the virus itself has caused, and that dehumanizing masks are generally pointless for anything other than testing the compliance of a frightened population.

Even the Centers for Disease Control and Prevention (CDC) itself has had to admit that only about 9,000 U.S. deaths out of the 165,000 attributed to Covid can actually be verified as being caused by Covid. Over the last six months criminally phony projections have been used to restrict the God-given rights of Ohioans and other Americans. Death numbers have been fudged – partially with the unethical participation of the nation’s medical facilities – and the case numbers blasted out by lazy news sources are completely irrelevant due to the complete lack of reliability of the tests being used as well as because of phony reporting.

Obediently playing their part, social media and the mainstream media suppress, censor and attack any information that runs contrary to the fearmongering narrative that is being implemented to keep people dancing on the strings of sociopaths.

Despite clear signs that continued draconian Covid protection measures are no longer necessary – if they ever were necessary – our own little Anthony appears more determined than ever to employ his power.

And few Ohio legislators evidently have the courage to stifle the unlimited powers the despot enjoys during this “health emergency.”

That includes my fellow republicans.

Republicans hold enough seats in both legislative chambers to override DeWine’s veto of any legislation. Yet they will not pass bills to limit the governor’s power, let alone advance impeachment proceedings. More than once I’ve read the phony and pathetic cop-out: “He’ll just veto it anyhow.”

People are not the property of the state.

Nor are they the property of any political party.

By his actions, DeWine has proven to have no respect for the rights of the individuals who elected him. Those legislators who have failed to condemn those actions, and who continue to support them, have shown that they too are making political decisions that are contrary to the rights of their constituents.

The psychological game that the republican and democrat party leaders like to play with their members is the threat that non-support of their terrible candidates could result in the election of the opposite party.

The real solution, if a party truly represents its members, is not to tout the lesser of two evils. The solution is to field better candidates – those who respect and represent the rights of their constituents instead of the high stakes whims of powerful club donors.

“It is despicable that anyone who considers themself (sic) to be conservative would make an attempt to impeach Governor DeWine. In a time of harsh political division, and an important election year, Republicans should be united. Ohio and the world have witnessed an unprecedented global pandemic — one that Governor DeWine has done a great job at leading us through.”

My support of impeachment, Jane, would make me despicable then.

And probably a deplorable, too.

But at least I understand the difference between a liberal and a conservative – or, to be more exact, I know the difference between the belief that each soul is a free creation of the Almighty and the belief that our lives should be under the control of the state. I also know that “anyone who considers themself to be conservative” wouldn’t appoint one of Ohio’s leading advocates of abortion – including late term abortion – to a position with near dictatorial power during a “health crisis.”

And now the “conservative” governor is pushing for tighter gun restrictions – aiming directly at Ohioans’ right to self defense.

It doesn’t matter to me what letter – R or D – this lifelong professional parasite puts after his name.

DeWine needs to go – or at least get reined in.

What “leaders” of my party are adult enough to put an end to this, once and for all? I’d like to know, because contrary to what the establishment of both parties will tell you, there is a choice on the ballot aside from the lesser of the two evils. It’s called a blank.